Imprudence (Book Two) Spends Too Much Time in the Sack 
Since I do love the world created by Gail Carriger and all its entwining familial and inter-species spheres, I am loath to admit that this most recent book struck me as just a tiny bit thin on plot.  And while I loved the bawdy and larger-than-this-world sexiness of the relationship of Rue’s parents (especially in the original entry of the Parasol Protectorate Series), I had to finally admit that the time spent between Rue and her potential fella, theoretically allowing Rue to become educated in physical pleasures, was downright tedious.  I began to think it was added in just to flesh out the book (pun intended).  Part of what made that first storyline move was that it was so forbidden, so very Victorian, to be involved with a “beast” and to acknowledge that sexuality.  It was what made the character of Rue’s mother so remarkable.

Unfortunately, Rue seems to suffer from that ailment of the children of famous Hollywood (or steampunk London, evidently) parents:  She needs to find out how to make it on her own, but she has had such freedom and special protection (and understanding) growing up that she hardly knows which way to rebel first.  This is reflected in the books, as Rue first flies off in her very own dirigible, the flatulent Spotted Custard and makes enough trouble overseas to cause Queen Victoria to withdraw her support and the special “sundowner” weapon. See Prudence -  Custard Protocol, Book One.

This time around, though, Rue is trying to help her parents, theoretically showing more maturity as she works to give them closure.  But the book also seems to be trying to recreate some of the mystique of the original series with its exploration of a new “were” species and by spending generous amounts of time dancing around the sexual exploits of Rue and her partner.  Not so successful, in my view.

What's next?  In bed with Primrose and the Werelioness?  Perish the thought!  And let's hope next time there is a bit more plot to fill in the gaps.

Amazon|Barnes & Noble|IndieBound
Posted by Meg Mahaley at 2:25 AM No comments:

Revenge and the Wild (and Crazy!) West Gets a Bit Out of Control 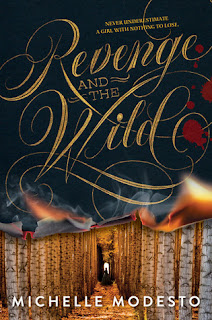 Revenge and the Wild, Michelle Modesto

In Revenge and the Wild, young Westie is on the run … from her own personal demons.  Most particularly from the need to find the cannibals (yes, cannibals) who killed and presumably ate her entire family while they were lost and separated from the rest of the westward wagon train.  Although she survived and was adopted by a millionaire inventor who created a powerful mechanical arm to replace her “lost” arm, this kind of thing leaves a mark on a girl:  Westie is a wild child!  Eventually her whirlwind of psychic pain draws everyone who loves her into its vortex, including her Wintu friend Bena, fellow cannibal survivor Alistair, her adoptive father, and even a friendly new vampire conquest.

I was first drawn to this book by … well, frankly, by that cannibal twist.  What’s up with this? I thought.  Honestly, that story still seems compelling to me, trying to solve the murder of her parents ... by cannibals, people!  And then those cannibals show up in her town as potential backers for her adoptive father’s new invention (which invention is necessary to save the “magic” that protects the entire town).  And that’s where things just kind of fall apart for me.

It’s not that no one else believes that these nice people are cannibals – I mean, they haven’t seen them eat anyone, and it’s a horrible thing to suggest about people one hardly knows – and after all, that’s just the way we make the main character struggle to prove her case, to put her through her paces.  Instead, the difficulty comes in the way in which the author has layered on the monsters and themes and … complications, until a lot of what was there was just ... a mess.

It’s cannibals and vampires and magic!  Oh, my!  Oh, and steampunk and Native Americans and trolls, and, by the way, zombies, and on and on and on.  And Westie is not just the possessor of a super-strong mechanical arm and a burning vendetta to find her family’s killers.  She is also (at the tender age of 17?) a recovering alcoholic who can’t quite get past that itch.  Possible, yes.  Necessary?  I dunno.  Just a bit too much for me.

So it was definitely the wild, wild Westie, and there were some good twists along the way, but I felt that the author introduced a crazy world that was never well-integrated.  This one is best read with mental eyes in a permanent half-squint, if you know what I mean, since the supernatural and steampunk blend left much to be desired.

Posted by Meg Mahaley at 1:02 AM No comments: